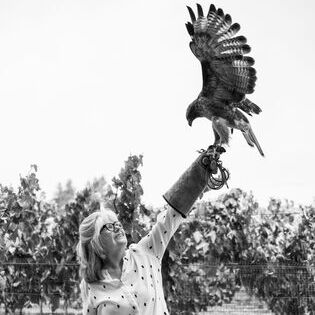 Carol is the vice president of Napa Wildlife Rescue (NWR), an organization that rescues, rehabilitates and releases Napa County wildlife. The organization cares for approximately 1,500 orphaned, sick or injured patients each year, including birds, opossums, raccoons, foxes, deer and more.

Carol became a volunteer in 2011 after retiring from a career as a city planner, and has been hooked ever since. She contributes countless hours—all voluntary—to administrative duties at NWR, and is a specialist for raptors such as hawks and owls.

“The most joy that I get from volunteering is being allowed to be in close proximity to wild animals,” she says. “It is a constant reminder of the amazing biodiversity of this planet and how humans are only one small part.”

Carol is also the handler of Maddie, NWR’s ambassador Red-tailed hawk, which she brings to classrooms and public events to strengthen connections between people and wildlife. Together, Carol and Maddie have appeared before hundreds of people.

After losing her home of 30 years to the 2017 Atlas fire, Carol also began volunteering with United Policyholders, a nonprofit that helps disaster survivors understand the insurance claims process. “I like to let people know there is a light at the end of the dark tunnel,” she says.

John nominated an Everyday Hero, Carol Poole, for #EverydayHero #InJoy @Stsupery to celebrate their volunteer contributions to and #givingback.