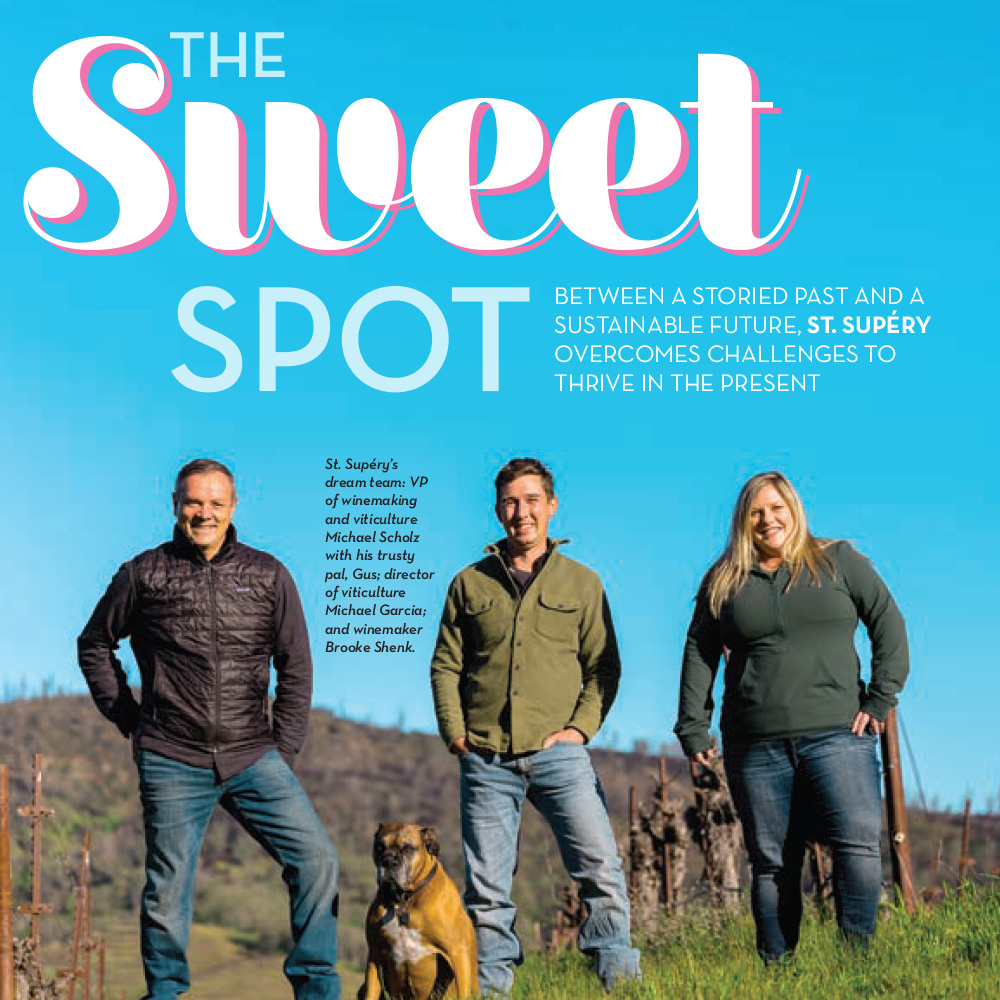 BETWEEN A STORIED PAST AND A SUSTAINABLE FUTURE, ST. SUPÉRY OVERCOMES CHALLENGES TO THRIVE IN THE PRESENT

Dollarhide Ranch, a 1,535-plus-acre estate in the northeastern corner of the Napa Valley AVA, is the engine that powers the estate-grown wines of St. Supéry. With more than 500 acres of Bordeaux varieties planted on rolling hills encompassed by the Vaca Mountains’ Cedar Roughs Wilderness and Las Posadas State Forest, the property sits between 650 and 1,100 feet—considered to be an “elevation sweet spot”—and is certified as a Napa Green Vineyard in transition. Under the direction of Michael Scholz, vice president of winemaking and viticulture, vineyard practices there are evolving ahead of the certification’s requirements despite recent hardships imposed by wildfire.

Only a miniscule amount of Sauvignon Blanc had been harvested by the time two fires converged around the estate in 2020; as they charred the perimeter of the vineyards, burning fence lines and damaging some higher-elevation vines, the crop—just weeks from harvest—was claimed by smoke, eliminating red-wine production for that year. It was the first loss of a vintage for Scholz, who credits a 5-mile fire break and a prescribed burn that helped stop the advancing flames for what was certainly a narrow escape. As the estate recovers, he notes, the significant loss of native flora within its boundaries has driven more wildlife into the areas where a diverse collection of species still thrives.

Biodiversity at the ranch had never been an afterthought; several orchards contain more than 1,200 fruit trees, representing 190 different varieties of olives, peaches, nectarines, apples, plums, and pluots. Creeks course through the estate and reservoirs support largemouth bass while providing a habitat for ducks, geese, cranes, egrets, and osprey; they coexist with jackrabbits, foxes, otters, bobcats, and bears, which are being sighted more frequently. Owl and bee
populations, meanwhile, are not only beneficial but essential to the estate for pest control and pollination of the fruit trees.

According to St. Supéry vineyard manager Michael Garcia, most of the winery’s originally terraced vineyards, which follow the orthography of the rolling hills, now have a permanent cover crop of reseeding native grass and forbs. Thanks to the help of sheep that are brought onto the ranch in the spring, the team has been able to eliminate one tractor pass in the vineyard annually; it’s a vital step toward addressing the results of a recent study of the soil types and farming practices here and at St. Supéry’s Rutherford estate that indicated that both properties are carbon positive. “We will be conducting further analysis and developing goals to continue to improve this as well,” says Garcia.

Even in the face of unprecedented change, the early history of both Dollarhide Ranch and the Rutherford estate—which was first planted as early as 1881—represents a provenance that only a handful of wineries in Napa Valley can claim. The former, named for Andrew Jackson Dollarhide, who settled the land in
1840, is clearly documented on early maps of the Rancho Locallomi Mexican land grant, granted to Julien Pope in 1841. Not much is known about Dollarhide—whose name is likely an anglicized form of de la Hyde, a prominent Irish family name from medieval times onward—other than that he planted grain and ran livestock.

If that site is St. Supéry’s purring engine, the 35-acre Rutherford estate, which is graced by the original founders’ Queen Anne Victorian home and a centuries-old oak tree, is most certainly its beating heart. In a stroke of serendipity, the estate has had a succession of French owners from the 1890s onward: Winemaker Edward St. Supéry, for whom the winery is named, was followed by vintner Robert Skalli, who purchased Dollarhide Ranch in 1982 and built the winery in 1985, and then by the Wertheimer family, who also own Chanel Inc., in 2015. Today, the giant planters that adorn the entrance to the winery are painted a
striking royal blue, the color of the Wertheimer family’s racing silks, and the estate grounds are French-inspired, with delightfully espaliered fruit trees and well-shaded cafe tables scattered across an expansive decomposed-granite patio.

Behind the idyllic scenes, key infrastructure upgrades led by Scholz and winemaker Brooke Shenk have leapfrogged the winery forward: It became Napa Green
certified in 2012 and has since continually reevaluated its practices against a checklist that exceeds 120 standards. These include water and energy savings, recycling, composting, responsible purchasing, carbonfootprint reduction, and a commitment to social equity, among others. Shenk expects that the winery will
achieve a 100% offset of its energy use with solar power in 2022. After its 2017 Napa Green audit, it tackled water conservation by moving to steam sanitation for barrels and retrofitted its cellar plumbing to reduce water use by 50%. “Once we were able to identify problem areas, we found solutions that resulted in these significant reductions,” she says.

As St. Supéry marks a decade of pursuing eco-conscious practices in Rutherford and shepherds Dollarhide Ranch toward Napa Green Vineyard’s Gold Level certification for herbicide-free vineyards, its future looks bright. Said Scholz in his characteristically easygoing, pragmatic manner, “One thing is for certain, from now to tomorrow: change.”

Categories: In the NewsIn the PressPress 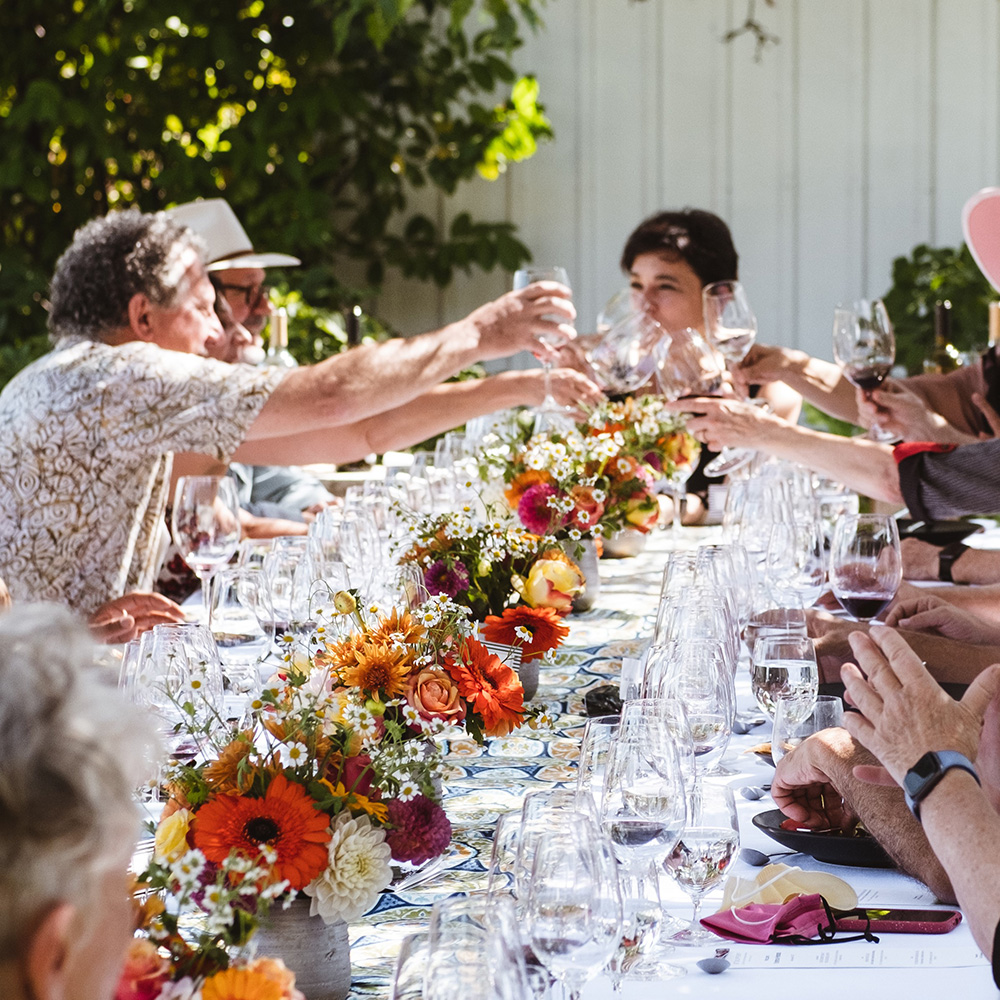 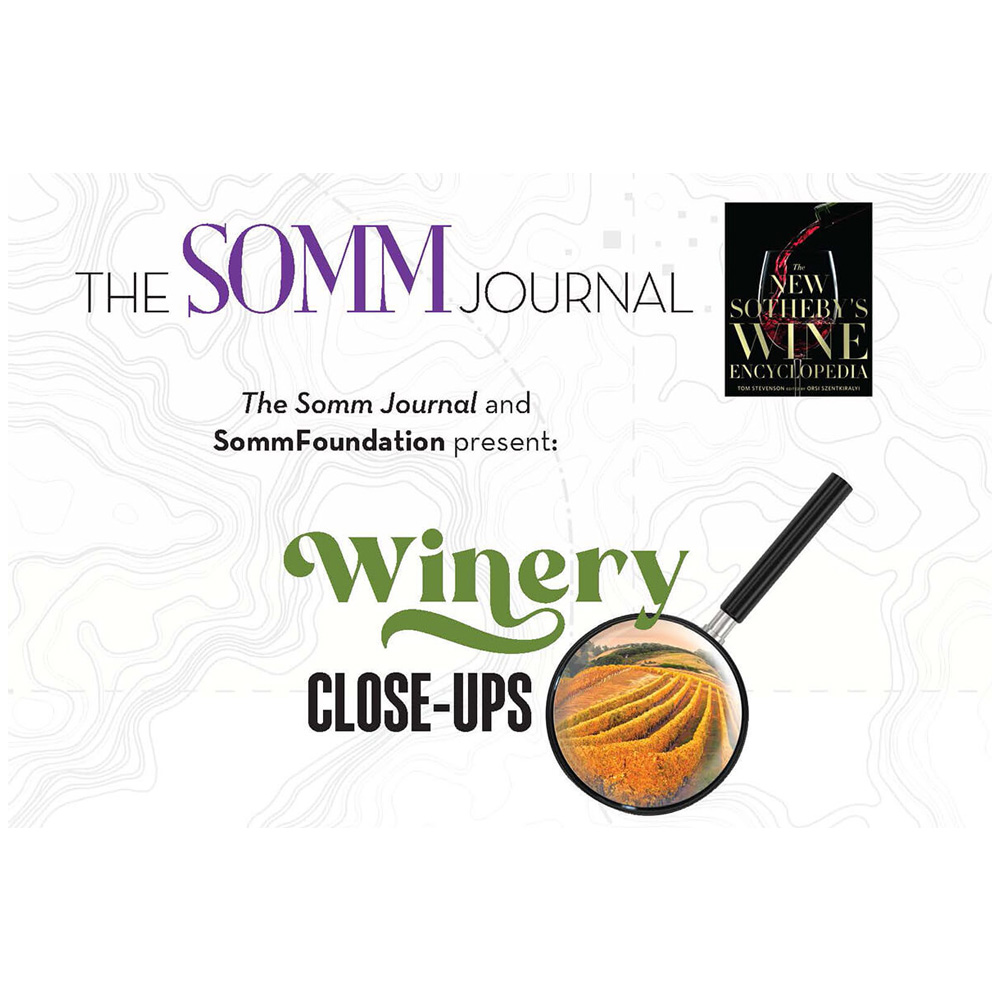 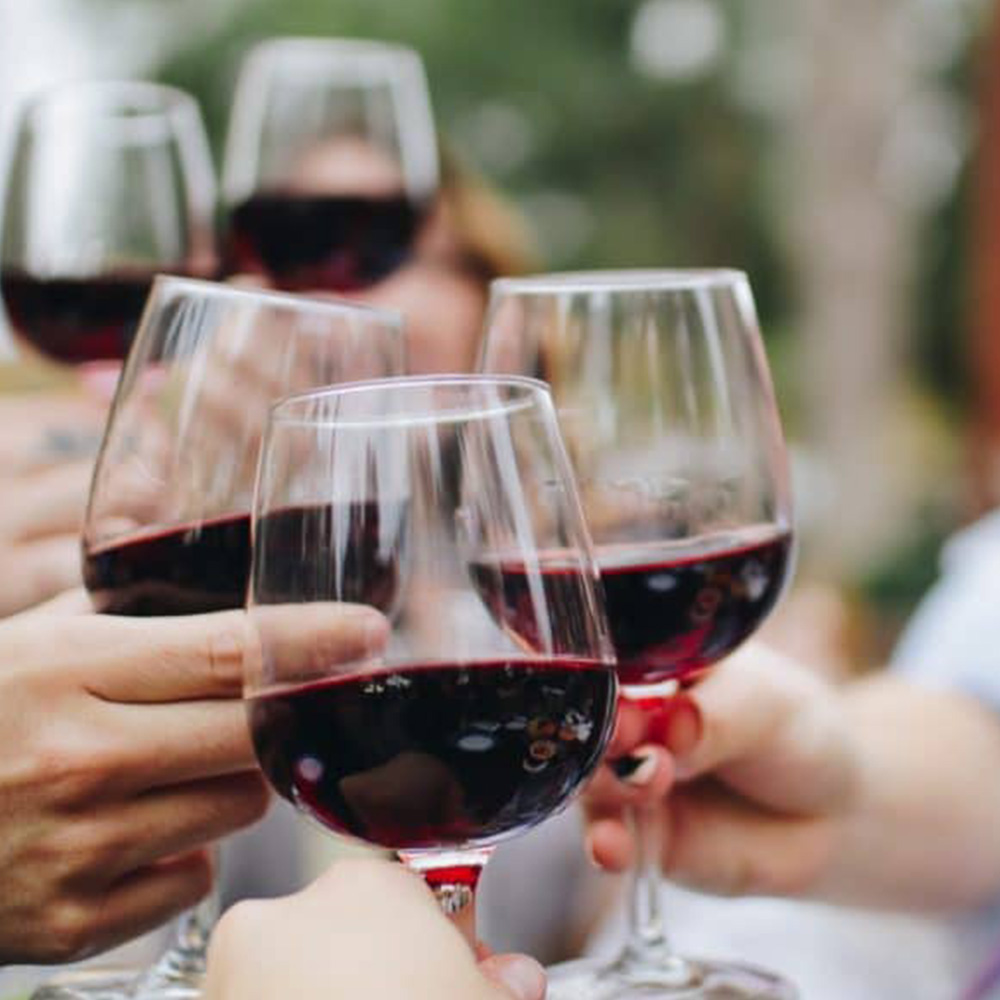 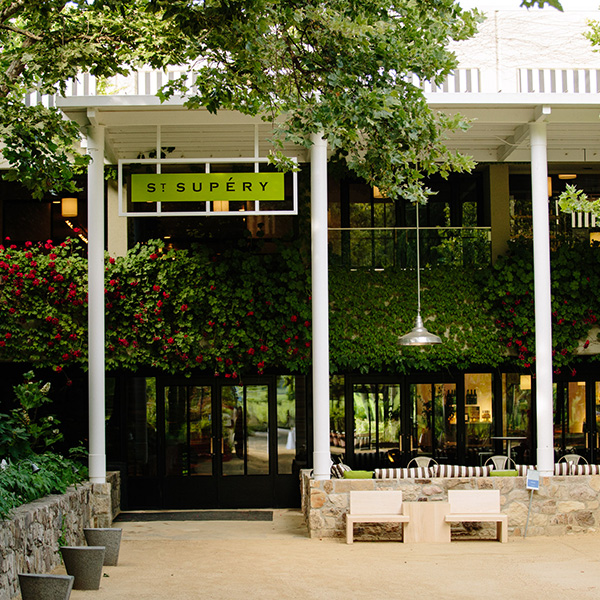